skip to main | skip to sidebar

On Thursday September 18, members of Tooele Writers gathered in the Tooele library to discuss critique groups. Laura Bastian, president of the writer’s group, gave the presentation.

Information included a list of critique-group how-tos from magicalworlds.net.   The full list can be found online here, but some of the ideas were to establish the type of writing the critique group would accept, including the necessary formatting.  Avoiding cliquishness, giving the types of critiques you would like to receive and focusing on the story elements (dialogue, plot holes, character development, etc.) are also important.

Some critique groups use a timer to keep discussions manageable and fair.

One of the most important things to remember when joining a critique group is to ask the group to answer questions about the things you’re looking for.

Laura also showed the group how to use some items of the review section in Microsoft Word. Besides simple ‘track changes,’ authors can merge the comments they get back from beta readers into one document and use the ‘accept’ and ‘reject’ features to sift through the comments they want to keep or delete.
Posted by Person at 7:51 PM 3 comments:

Fun at the Tooele Writer's Meet and Greet night in July 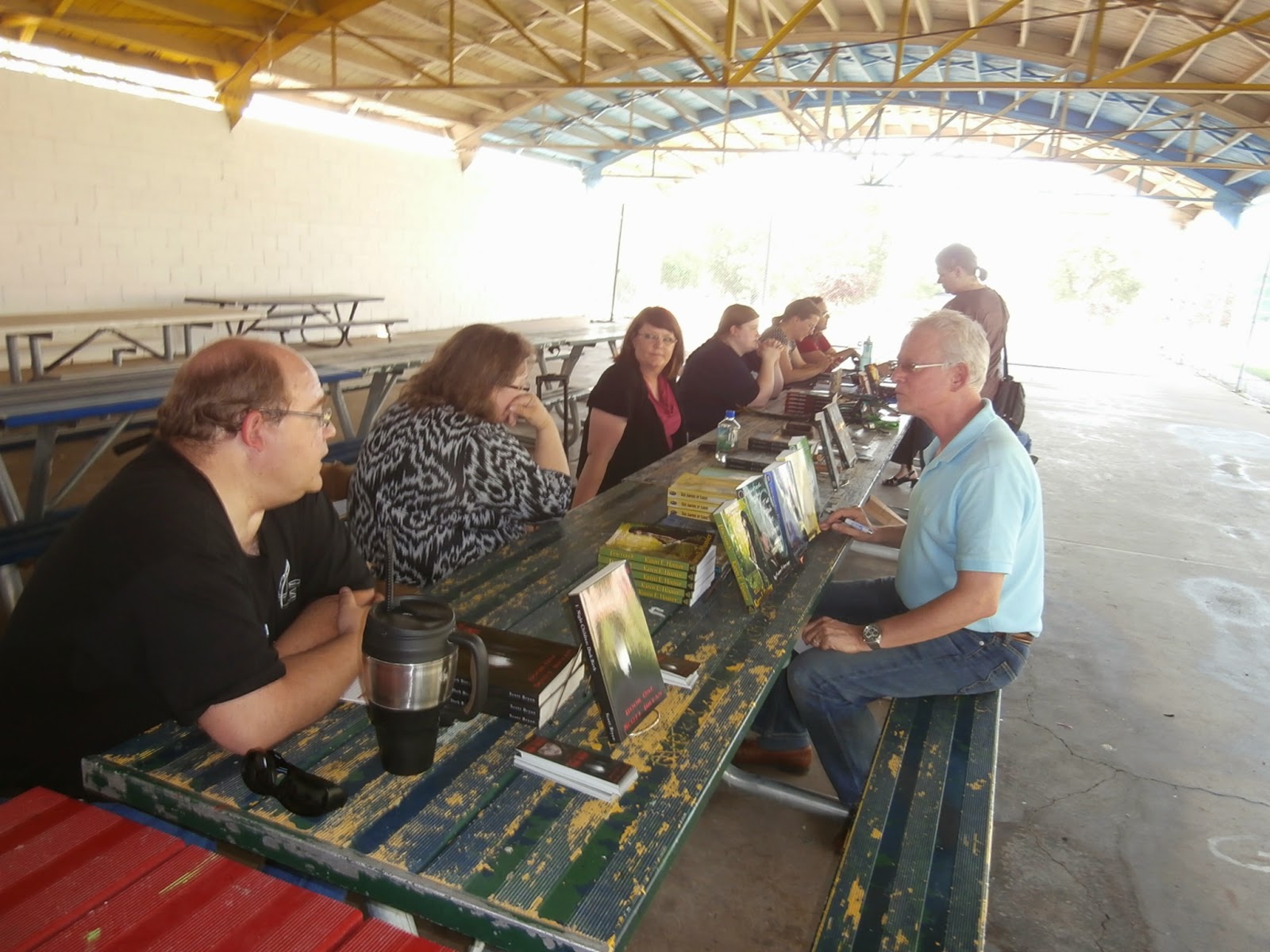 On July 18, members of Tooele Writer’s Group gathered at the pavilion next to the pool for a public meet-and-greet-the-author night. Several authors brought books to sign.

While the public and authors came and went as they pleased, the authors (and their books) that were present at 6:00 P.M. are listed below. 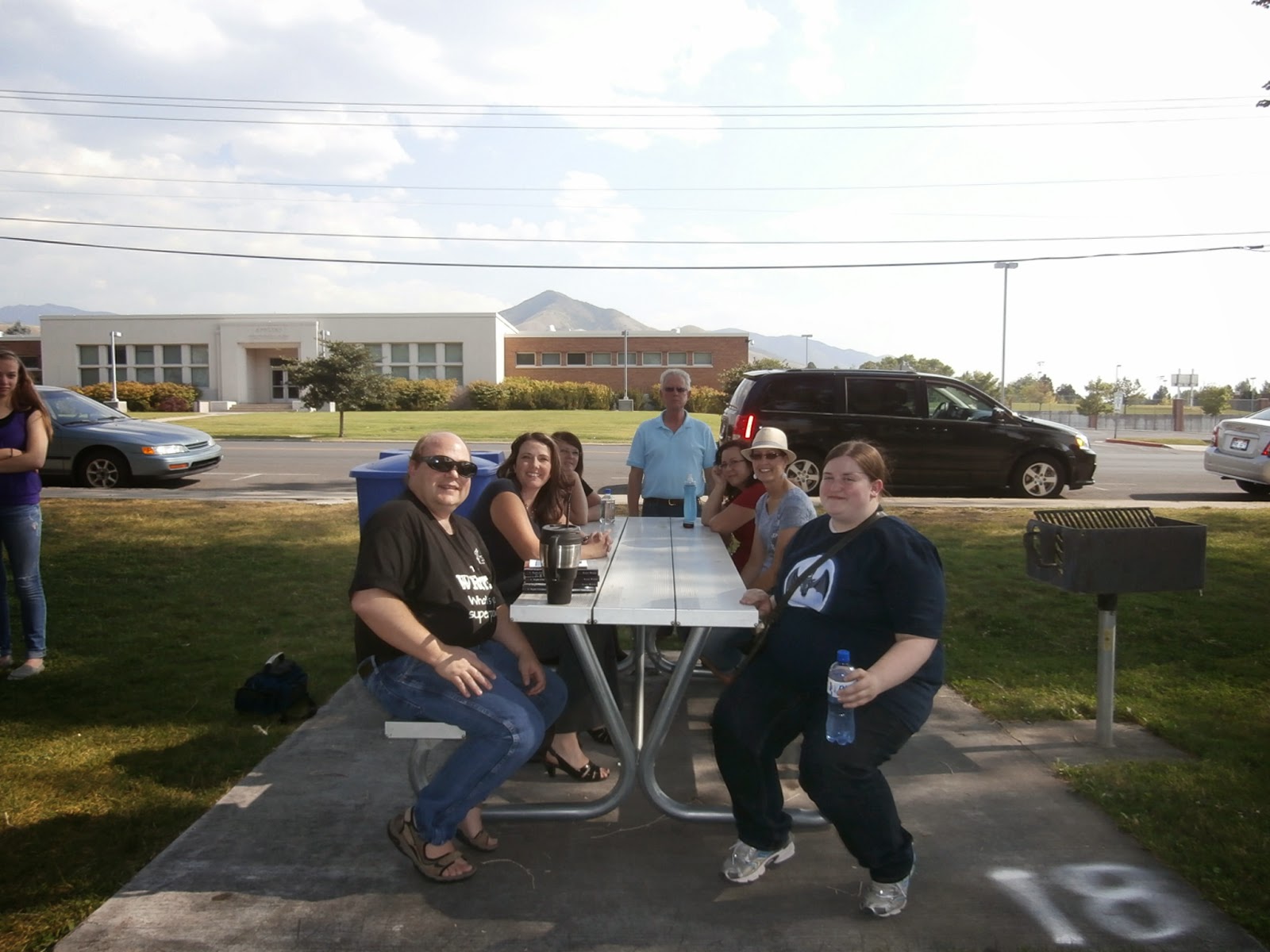 Meet the Authors of Tooele County

Tooele is full of talent.

In the five years I've been involved in the writing community, I've seen so much talent in our little area. We've got a handful of authors who are published.  Both traditionally, as well as independently. One thing that impresses me about authors, is how friendly they are, and how genuinely interested they are in seeing each other succeed.

Though I've been involved mostly in writing genre fiction in the Young Adult and Middle Grade fantasy categories, I know we have lots of people interested in Non Fiction, Poetry, Short stories, and many others.

We want to expand our group and welcome anyone with an interest in writing to check us out. We are a Chapter of the League of Utah Writers, and being a due paying member offers lots of benefits. However, we welcome anyone to our meetings.  If you're interested in becoming a member of the League, check out this link.  http://www.luwriters.org/

We typically meet the 3rd Thursday of each month at 6:30 to 8:00 at the Tooele City Library.

We have a Facebook page where we share writing tips and get help and feedback on a variety of topics.

In the comments you'll see information from a variety of authors connected to our group.  Please feel free to contact me at AuthorLauraBastian@gmail.com if you have any questions or are interested in joining.

In June, Tooele Writer’s Group had a pot-luck picnic dinner. The group was small, but the chatting was as fun as always!

Here's one of the fun recipes from that night:

The guacamole is just mashed avocados with a pinch of salt and some lime juice.

Who else from Tooele Writers wants to share recipes? E-mail me at gwenbristol@gmail.com, and I'll put them up here.
Posted by Person at 1:28 PM 6 comments:

May meeting of Tooele Writers

This was a lot of fun and very informative.


This past Thursday, members of Tooele Writers met to share and discuss what some learned from a recent LDS Storymaker’s conference.

Tiffany Shumway discussed how to outline novels using the information she learned in a workshop based on ‘Save the Cat!’ by Blake Snyder. In this system, books are organized into fifteen sections or ‘beats,’ as follows:

Also, authors should brainstorm a title, a tagline and a pitch before they even begin to outline.

Next Cindy Whitney discussed her class from Lisa Mangum on voice and said Mangum was very clear that voice and style are not the same thing.

Voice is more about what you have to say than how you say it, but it’s also a way to portray your personality as a writer. It has to do with quality of writing and personal attitude. Mangum offered the acronym SING to help understand how to create a clear and distinct writing voice.

S=be SELECTIVE. Carefully choose the words you use, including varying the length of sentences. Also be selective about pacing, settings, dialogue, action, narration and characters, etc.

I=be  INTENSE. The point here is to evoke strong emotions. Think  about how you feel when you’re writing and try to stay true to that, and the emotions will come out with clarity and strength in the manuscript.

N=be NOTORIOUS. Find out what your characters are known for and how they want to be perceived. Also pick three adjectives to describe your writing (for example, snarky, fun and flirty) and aim to make all your writing like that. Laura Bastian pointed out that this could be a branding technique.

G=be GENUINE. Authors should be brave enough to say something. When you have something to say and you find the right words and the right stye your voice will ring true every time.

Cindy also shared her notes on six mistakes authors make from a class she took from Kathy Gordon, managing editor at Covenant Communications. Here they are:
1.       Too much irrelevant detail or backstory
2.       Too many words—cut the story by 50%.
3.       Too many adjectives or adverbs
4.       Not enough strong verbs
5.       Marshmallow dialogue—too soft and squishy
6.       Get rid of outlandish names

Laura Bastian quickly covered her notes from the class she took from Brandon Sanderson on developing characters. Here's a quick list of some of the things that were covered:


At the end of the meeting, members discussed gesture crutches from a class taught by Jordan McCollom. While gestures and body language are necessary in writing, some things are overused. If you’re going to use a gesture, don’t use the first thing that pops into your head. Be creative and come up with a different gesture that can show the same emotion. Nods, head shakes, anything with eyes and eyebrows are overused. Use something unexpected.

Also, don’t use gestures too much to replace taglines. Some of this is okay. Just not all the time.

Tiffany Shumway has already posted links to several good 15-beat pages on the Facebook group for Tooele Writers, and Cindy Whitney posted one as well. Here they are:
http://jamigold.com/for-writers/worksheets-for-writers/
http://www.alicross.com/2012/07/what-heck-is-beat-board-and-other-ali.html
http://romanceuniversity.org/2013/10/23/using-scrivener-to-save-the-cat-by-pat-haggerty/

Two software programs were discussed Wednesday evening as members of Tooele Writers met to learn about novel writing software and how it can ease the writing and publishing process.

Krista Wayment, who tried several novel writing programs before she settled on YWriter5, presented her experiences during the first part of the meeting.

“This was the one I liked the best,” she said.

During the last part of the meeting Cindy Whitney showed attendees how to use Scrivener.

“Things are organized as if you had a paper binder,” she said.

While both novel-writing programs simplify the creation and publishing process, they also have unique features that set them apart—especially when compared to simple word-processing programs.

Google Drive was also mentioned in passing as a good tool for novel writing, although it wasn’t discussed during the meeting.

Thanks to Laura Bastian for hosting the meeting and to Krista Wayment and Cindy Whitney for presenting.